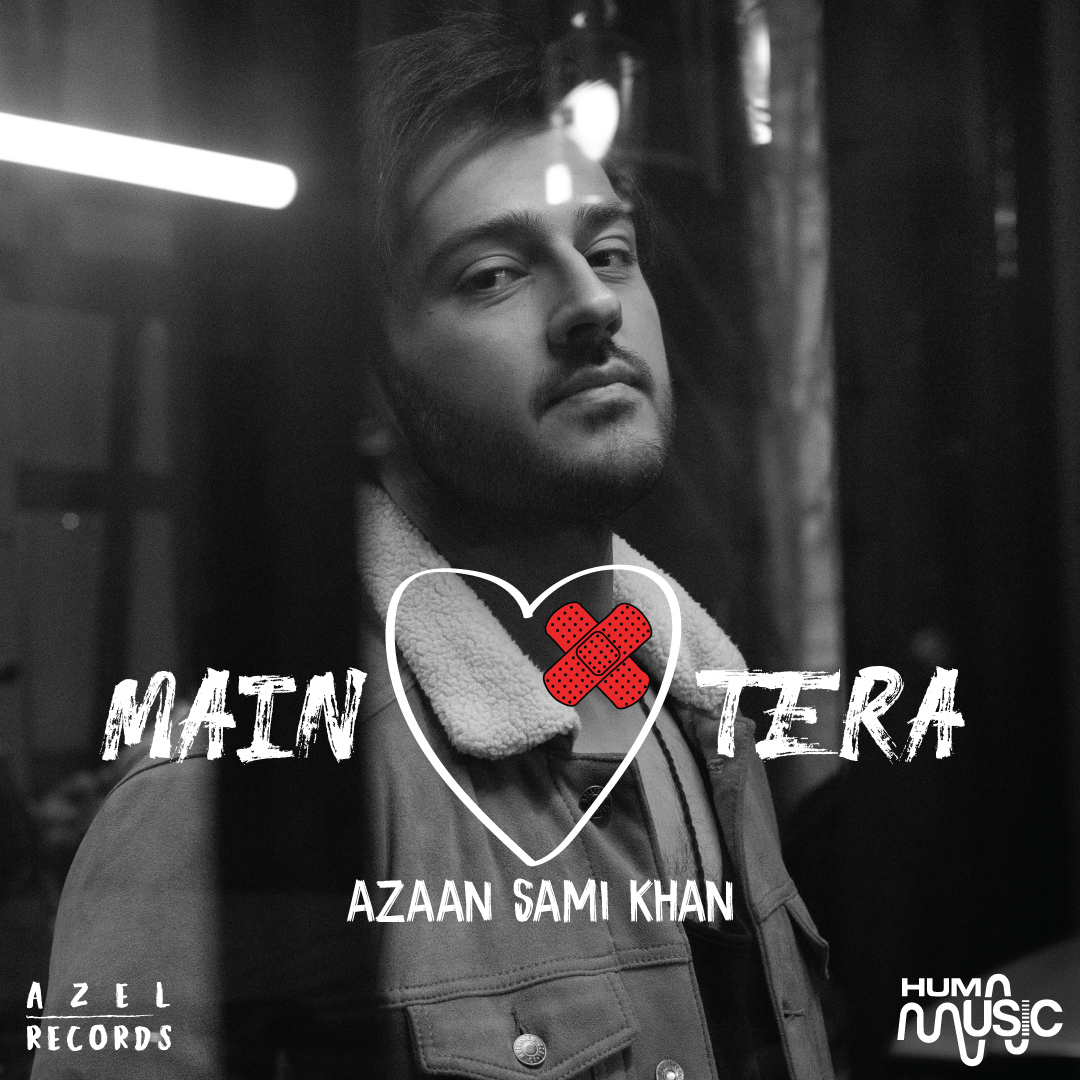 Using music as a binding force in times when everything seems unprecedented, composer Azaan Sami Khan, has announced his new project – a debut solo album titled Main Tera. Usually absent from social media, Khan has taken to Instagram to unveil the album cover, along with an exciting track list and the release date of his first single, which also happens to be the title track, all set to release on 10th February 2021.

Known for his chart-topping compositions in films, a step towards something far more intimate at this point in his career felt right for Khan. “I wanted to do my own album for many years and have managed to infuse a lot of personal elements in it. It’s almost biographical in some ways. I have delved into the first time I fell in love with somebody, the first crush, the first heartbreak, you’d basically witness a lot of firsts in this as it’s my first album,” he explains.

With subject matter that many will resonate with, Khan also reveals who’s always at the forefront for him whenever he’s creating music. “For me, the fans and the listeners are the most important. So far, they have given me so much love for my compositions in films, so it is equally important for them to know that I haven’t compromised anything when it came to sharing my own album with them. The idea is to give them the absolute best experience that I can,”he says.

The album announcement completes what has been a remarkable period for Khan, who gave the Pakistani entertainment industry hit after hit in critically and commercially acclaimed films like Parey Hut Love, Superstar, andParwaaz Hai Junoon. The release date of the album is yet to be announced but we’ll be on the lookout for what the single has in store for us.

The album will be released under the banner of HUM Music, an initiative established by HUM Network Limited to support and highlight the incredible music and diverse roster of creative musicians that Pakistan has to offer. The vision behind founding HUM Music is to help revive the lost culture of concerts, album launches and the pop scene that the country was once known for. Debuting with the incredibly talented Azaan Sami Khan’s album ‘Main Tera’, HUM Music aims to revitalise Pakistan’s music scene by bringing exclusive and experimental music to global audiences, featuring stalwarts of the country’s music scene along with young aspiring talent.

What was the creative journey behind the song and how long was the process to fruition?

Main Tera came into fruition sporadically. It was a composition of mine that I had in my head for a while, and it developed over a period of six, seven months, where I would work on it for some time, leave it for a while, and then get back to it. Sometimes you write songs that reach completion within a matter of days, while some songs take longer. So, Main Tera was a song that basically lived with me for awhile.

What was the inspiration behind Main Tera? Is it connected to a personal experience?

Everything in this album is a personal experience. Each song has its own story. I don’t want to delve too deep into the story of Main Tera, but when you hear it, you’ll understand. It’s about what you feel when you first meet that special person. I didn’t go in with the mindset where I felt the need to make something that’s missing on the album; I chose to use my own personal experiences as the inspiration.

It’s a very emotionally mature song. Do you feel it signifies a personal sense of ever-evolving wisdom and life perspective?

So, just to put it out there, whenever I have thought of myself as wise, I have immediately realised how unwise I am. I don’t think I am wise in all honesty, but I do feel this song came from a specific point in my life where I finally realised things my younger self hadn’t realised. So, maybe the maturity factor comes from the fact that it was the point in my life where I felt happy, content and excited about meeting someone, and that shows.

Tell us more about the music video and the creative concept and the
inspiration behind it.

For quite a while now, I have been working with Ehtashamuddin sahab, who is the director of Superstar and someone I am lucky to share a very close relationship with. He was kind enough to agree to direct the video for Main Tera, where I worked closely with him and learned so much. The idea was to make a very simple video with nostalgic, romantic vibes from old movies, taking inspiration from stories that unroll in the span of one night, and where a guy meets a girl and there are no other characters. The idea was truly that simple, and I hope people connect with the simplicity of it.

What vibe can be expected from the album as a whole? Will it be similar to Main Tera? Does it feature multiple genres?

No, it is not similar to Main Tera. I’ve tried to not be repetitive or have similar sounding songs on the album. I do believe that the only thing I kept in mind while working on it was the idea to have one song each that connects with a specific emotion and represents a certain idea. I wanted to put out nine songs that were very different from each other, in terms of the subject matter and the feelings they evoke. Even the marketing strategy is designed in a way where each song would have its own artwork and poster, portraying an entirely different world of its own. So, I’m very excited for people to see the many different shades of the album, which is exactly how life is in its essence, it has a variety of different colours to it. When a song comes out, each person is going through something individually unique in their lives are a song at least in my life has played a huge role in coping with that, good or bad.

Compared to your more recent film soundtracks, what can your fans expect from the album? Any surprises?

In terms of the approach, I have always grown up really liking cinematic film music. So, some people might feel that the album follows that cinematic kind of sound. I, however, don’t agree with them, but maybe it does. In terms of musicality, there are bonus tracks on the album, which are different renditions and interpretations of some of the songs. And as for the surprises, there’s a Punjabi song on the album called Jaadugari, written by a very dear friend who passed away last year, Sir Shakeel Sohail.He was an incredible lyricist who I had the Honour of working with very closely since the beginning of my career. This is one of the last songs he had written
for me. I am very excited for people to hear it, he has done an incredible job on it. And it’s my pride that I have his blessing on the album. There’s also a song called Zama, which is in my native language Pashto. I come from a Pathan family and I thought it was very important to have a contemporary song in Pashto on the album, to represent where I come from.

Are there any collaboration on the album that your fans should be excited about?

In terms of singers that I have collaborated with, there’s a song which was a huge blessing for me and the album being with Ustaad Rahat Fateh Ali Khan sahib, which was an incredible experience and I think something his fans would enjoy a lot as well. There are a lot of people who I’ve collaborated with on the album. About 54 musicians have worked on it, and they’re some of the best ones from Pakistan, India, Turkey, UK, and Macedonia. So, in those terms, the sound is definitely something
that people would want to look forward to.

What made you choose Main Tera as the first track to release from the
upcoming album?

I think it’s the most simple and innocent song on the tracklist. I was advised to go with some of the other songs on the album, which was probably more intense or catchy, but I didn’t go with them because I felt it would set the wrong tone for the album. I wanted to set the correct tone, it is a romantic album, and I wanted to start off with the most basic feeling you feel when you fall in love with somebody, and then you move into the more complex shades of a relationship. And I feel Main Tera sets that tone.
Has the current pandemic affected your creative journey? How has the situation challenged or inspired your creative process? Has it been a positive and enriching experience?

I don’t want to think of the time that has been so terrible for people in the world, as something positive and enriching. However, in terms of just the time duration, the world came to stand still for a very long period which allowed people like me to work longer hours and give more time to a project that I wouldn’t have been able to in normal circumstances. I got to spend more time with musicians who would normally be very busy, and wouldn’t have been able to put in this many hours in the album. So, in that sense, it was obviously a luxury to be able to put in extra work on each song and focus on the nitty gritty details more. But obviously, it would still be very insensitive to deem it a favourable time period.

How has your musical journey evolved through the new album?

I think I learned more about myself, and what my thought process is. In this album, the idea was to be vulnerable and stay true to what it was. So, I revisited places in my head that were not comfortable, only to make a certain song true and honest. There are a couple of songs on the album that stem from a very dark time in my life, which made them hard to work on for me. So, whenever I am working on a song, I naturally end up in different headspaces and at the end of the day, it makes me happy knowing it comes from an honest place and I hope someone connects with it if they are fortunately or unfortunately going through something similar.

What have you missed most as an artist during the pandemic and lockdown, and how has it made you revaluate your creative process and making music?

I think a sense of community is what I miss the most. I miss hugging and being around people I love, but for the sake of the safety of our family and ourselves, we have to maintain that distance now. I miss the community style of living, going to public places, cinemas, restaurants, concerts, and generally living life that way. I hope and pray it comes back soon, when it is safe again insha’Allah.