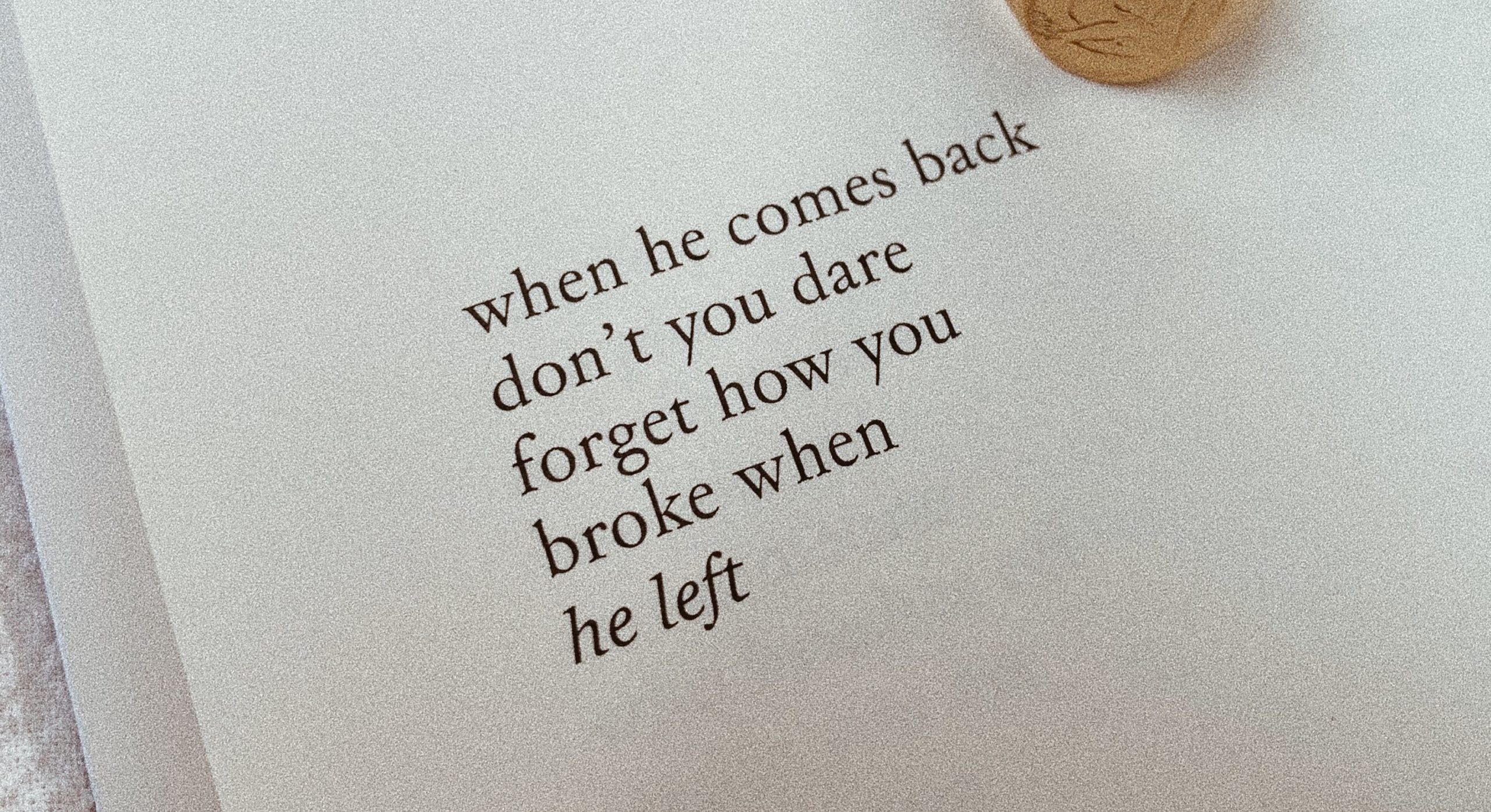 She’ll just say it in a few words.

She’s a little quirky, a little silly in small pockets of time, and quite frankly she is pretty funny. At first glance, you notice a very shy soul that hides behind her big glasses but also behind her words. And as you read, it clicks. You get her and you connect instantly. Michaela Angemeer, who happens to be a psychology major, is a self-published author of two anthologies When He Leaves You and But You’ll Come Back to Yourself, based in Canada. At the age of 7 years old, she began writing in a diary and wrote little poems here and there, and through time, she received the same feedback: what exactly are you trying to say? Well, she knows now.

“Everything graduated into, just dating, I think. I always talk about millennial dating, and just dating in these times. It’s so different. Like this online world that we’re in, like meeting people through friends doesn’t seem to be happening anymore.” When He Leaves You has a whole section dedicated, as she puts it, to the many “hims” that have popped in and out throughout dating, with one that specifically left her out of sorts. Before publishing, she was uncertain of the flow of the book. She started off with a big mass of poems and then combed through them by themes. Some she found were too brutal, so she didn’t include them. Then her grandmother was hospitalized and ended up passing away. “I literally wrote poems in my phone by her bedside while she was in and out.” The moment became clear to Angemeer. She was going to end the book with poems about her grandmother and the unconditional love that she showed.  “I wanted to bring it back to the fact that that’s the point. Sure, I can have all of these petty relationships, these big heartbreaks, but obviously nothing is more heartbreaking than losing a loved one.” The completion of her first book is filled with symbolism of coming and going, from her dad, men, and grandmother. “I thought, this is full circle, it’s a book.”

Angemeer recollects that when she first began writing, she was way vaguer and always thought poetry was about hiding secrets in words. She then transitioned into ‘slaps you in the face’ type of writing. “I did a book signing once, and I ended up talking to a bunch of old people which was funny. One older man, he was probably like in his 60s or 70s, he picks up my book and opens it up and reads one poem and was like ‘wow, this really slaps you in the face.’ I was glad this 60-year-old guy opened it and got it.”

Her next book, which she is currently working on, will include short stories and poetry. “I internalized the criticism of insta-poetry, so I might do more short stories inside a collection of poetry just to anchor it and give more context.” But during these times, her motivation was ebbing and flowing. “With my first two books, I compiled them and did all of the editing and putting them together at a coffee shop. I just love that environment of being around people and being able to people watch, and having that energy of creating the book. Right now, there is no coffee shop where I can sit in” she says. “As you’re working, you match that pace.”

Angemeer doesn’t always find herself clasped in the hands of writer’s block. “I can always write. I can spew word vomit. I always find something to say, but a lot of times it’s not good.” She will write, but there are times when she won’t like it. If there is a poem that she can’t make feel right, then she will, as she calls it, “chop it.” “Oftentimes, I’ll find an excerpt from a longer [poem] and post it.” But spewing out words isn’t the biggest problem. Many people find that if a poem is longer, it’s valid writing. “People that post poetry on Instagram are capable of writing longer pieces, but it’s about going with the format and marketing. Why should we have to validate ourselves by writing a two-page poem in a small square on Instagram?” If you visit her Instagram profile, you will find a grid filled with short pieces, specifically formatted to fit the Instagram format. “Insta-poetry and shorter quote type poetry gets a lot of flak and is told it’s not real poetry.” But she is constantly told by her followers that her poetry resonates with them. Occasionally, she writes poetry inspired by her friends which delves into motivation and self-love. “At the end of the day, for the most part, I’m just sharing my feelings with women. That’s why I write.”